Key to this is acknowledging that a relationship status is not a personâ€™s identity and neither is it a reflection of their competence or their independence.

Yet however, for better or for worse, the next generation many times find themselves â€˜trappedâ€™ in the generational shadow.Â  Whilst this may afford the benefit and privilege of putting on the mantle of a legacy to be proud of, at times, in the wrong context, it can be seen as a burden and a hindrance in developing their own identity and being judged on their own merit and vision.

It is, in fact, one of the reasons why the next generation sometimes opts to cut the umbilical cord from the family business in search of an identity that will be separate them from that of the founder.

Fear of failure and growing up in the shadow of strong, driven personalities can be a turn-off for young people. They shy away from developing ideas and taking risks for fear of not living up to the enormous success of previous generations.

Every family business starts with great innovation, or a great entrepreneur – or both – but as these businesses move away from their founding generation, keeping the entrepreneurial spirit alive can be a challenge. As time passes, the excitement and creative momentum built up in the early years can give way to mindsets more preoccupied with safeguarding what’s been achieved rather than exploring new risk-taking opportunities.Â  This can inevitably lead to a casting of a dye which becomes a shadow that the next generation must live under.

This cycle is not inevitable and as time goes by, families need to work harder to keep their entrepreneurial culture alive and to make sure an enterprising business philosophy stays near the top of the family’s agenda.Â  Many a time this involves pushing the next generation to create their own landscape and not putting them at risk of being forced to live in the shadow of the founder and being labeled as the genetic extension of the original successor.

Below are some thoughts to consider whichever side of the table you happen to be sitting on:

Advice for the business community:

Build your own relationship with the next generation, independently of the founder.Â  Judge them once you know them â€“ and do not see them through the eyes of their family members. Appreciate that the next generation is linked only by a coincidence of nature.

They do not want to be referred to as Xâ€™s child, no matter how positive the compliment may be.Â  Setting that as the standard way to refer to their identity only risks isolating how they perceive you in return and build their own business relationship with you.

Many times, the next generation, having received the right training and exposure will be the ones to take the family business to a whole new level. With the benefit of observing from their peers and learning from their mistakes combined with their own vision, they can transform the business and you want to be part of that ride. 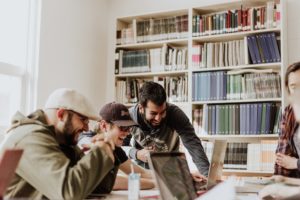 Advice for the next generation: Establish your own identity, not by seeking to distance yourself from your family, but by learning from your familyâ€™s strengths and embracing the history, skills, and sacrifice to build the family business.Â  All good leaders and entrepreneurs develop through experience and exposure.Â Having the benefit and insight to acquire that through a family business should be seen as a quality opportunity to acquire solid and real experience.

A second point to consider is that the role of the next generation is not to seek to please the first generation or emulate the same character.Â Â  The next generation is the innovators, a new level of education and mindset and the more that this creativity and independence is explored the more the family business can benefit.Â  Developing new ideas, dusting off old habits, establishing different practices are the savior of businesses as times roll on and it is the next generation who are best adapted to do so and are the essential support system and lifeline to continue what the founders build.Â  Voicing and bringing all this to the table should be done with confidence and appreciation of the unique contribution that only the next generation can bring.

Advice for the founders:

Reluctance to let go is one of the most important factors in the failure of succession in family businesses and needs to be avoided to reduce the risk of the generational shadow. Leaders are often unwilling to plan for succession for reasons including an emotional attachment to the business, their fear of retirement, loss of status, lack of power, or even a lack of diversions outside work. This attachment to the business leads many family business leaders to occupy a leadership or consultant position, even after retirement. While their experience can be invaluable to the business, this continued presence can be perceived as a lack of trust in the competencies of their successor. This can adversely affect the decision-making processÂ and loyalty of employees, leading to frustration from the side of the successor as they live the shadow of the previous leader. This inability to transfer power can be described as an addiction with all the negative consequences that this term suggests.

It is imperative that the whilst the founder stands beside and behind the next generation in guiding them forward that they challenge them to run ahead and lead independently and thoughtfully in the comfort that they are knowledgeable and confident enough to take the reins.Â  The more the next generation are encouraged to bring to the table their ideas and allowed to develop them the more they are released from the shadow and the less fear they will have of being cast in the mold.

You can find out more about which cookies we are using or switch them off in settings.

This website uses cookies so that we can provide you with the best user experience possible. Cookie information is stored in your browser and performs functions such as recognising you when you return to our website and helping our team to understand which sections of the website you find most interesting and useful.

Strictly Necessary Cookie should be enabled at all times so that we can save your preferences for cookie settings.

If you disable this cookie, we will not be able to save your preferences. This means that every time you visit this website you will need to enable or disable cookies again.

This website uses Google Analytics to collect anonymous information such as the number of visitors to the site, and the most popular pages.